Remington Arsenal successfully developed M870 Shotgun in the early 1950s. It is the American shotgun with the largest number of manufacturers and the broadest range of applications.

For its compact structure, reliable performance, and reasonable price, people soon loved it. As we all know, since the early 1950s, it has been special equipment for the U.S. military and police, and the U.S. border guard especially loves this gun. 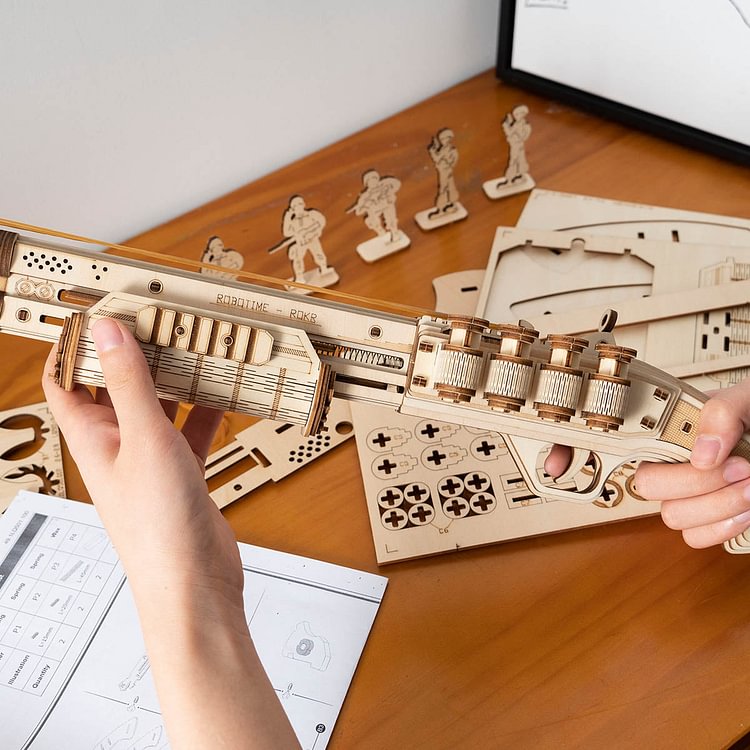 Tips: ROKR Terminator M870 Gun Toy is just a safe and simple wooden puzzle toy, we use rubber bands as its "bullet" instead, so it will not cause harm to people's health.

First let's watch a video about it

LQ501 reproduces the classic M870 shotgun in proportion with the length of 435mm. The shape and internal mechanical structure are highly restored, but its weight is only 210g, which is easy to hold. Besides, every detail is reproduced in equal proportion.

The gun body is designed with a single hand-held short handle. It will have a real bolt-pulling feel after being used. It can load two rounds of ammunition at one time, with an effective range of 8m.

It contains 100 flexible rubber bands with sufficient ammunition. As long as you load the rubber band, pull the slider, and pull the trigger, the wooden targets will fall.

It has only 170 parts. It is a three-star assembled 3D Wooden Puzzle, which belongs to a low-difficulty assembled toy. The estimated completion time is 1.5h, which is also very suitable for assembly for many children.

I believe that any boy has no resistance to it. As a 3D Wooden Puzzle, it can meet the needs of both manual and firearms enthusiasts. Protect childlike innocence, and let every child and adult reproduce their heroic moments!

Assemble a toy "gun" by yourself. Is there anything cooler than this?